We’ve made it through the first two rounds of the tournament and the decisions just keep getting more difficult. There were some massive upsets and many closer than I thought they would be match-ups in the Round of 32. Eleven of the sixteen match-ups in the Round of 32 came down to one or two votes. These brackets are always surprising to me in the best possible way. Here’s how it all shook out:

Lucky Charms put the beat down on the 6 seeded Apple Jacks, winning 92-8.

Cinnamon Toast Crunch had a tough first half, but came on strong late knocking out the 7 seeded Frosted Flakes 58-42.

Our second 1 seed to exit the tournament is Glazed Donuts. In a bit of an upset, Texas Style Kolaches knocked off the last remaining donuts 58-42.

Danishes come out with a 2 vote victory over Éclairs 58-42.

Cinnamon Rolls continued winning in dominating fashion, ruthlessly taking out Bear Claws 100-0. This 3 seed has yet to give up one vote this tournament. Unreal!

Our underdog game came down to a couple of votes as well. The 10 seed is moving on to the Sweet 16 via a 58-42 win over Crêpes.

The 1 seed in this region, Waffles, had no problem dispatching of the 9 seed Toast, winning 92-8.

Biscuits & Gravy came up against its most difficult challenger yet, but came out victorious over the 4 seed delicious French Toast by a final score of 58-42.

The 3 seed moves on, beating the 6 seed Bagels 58-42. I’m starting to see a trend with these scores.

Fried Eggs soars into the Sweet 16 on the back of a 82-18 victory over Sausage Patties.

Scrambled Eggs had a tough match-up here. Huevos Rancheros gave Scrambled Eggs all they could handle but came up just short as the 3 seed got the win 58-42.

This one was tough. You guys had the same problem I did apparently as the 10 seed Breakfast Sandwiches beat 2 seed Omelets by one vote, 53-47.

Links to the Sweet 16 polls are under the bracket. One vote per person per match-up. Click on the match-ups and the poll should open. 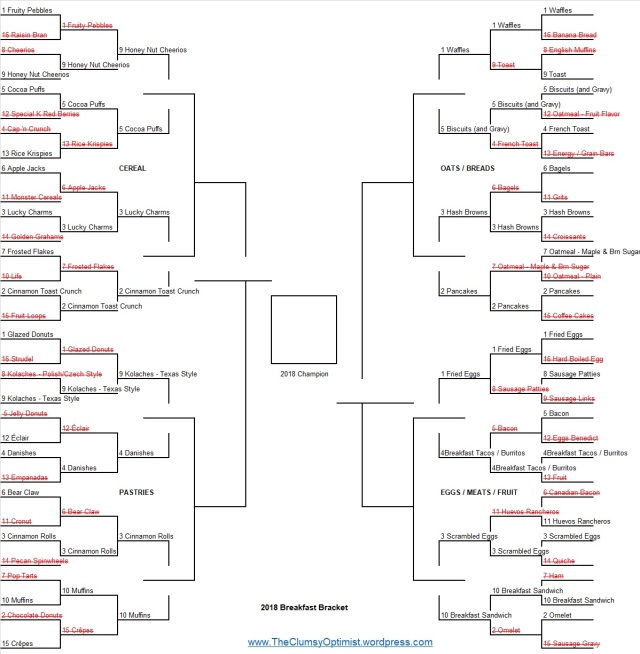 Let’s get to voting! There are some fantastic match-ups that I cannot begin to figure out how I will vote. Good luck making your decisions. I can’t wait to see who moves on! Voting will end Sunday March 25 at 5pm and the Elite 8 will begin on Monday.