Here we are. Over the past four weeks we have whittled the best 68 musical acts I could think of down to the final two. I was quite pleased with the Final Four. All four teams had to fight to the end with no one winning my more than 3 votes. No act has won by more than 3 votes since the Sweet 16 – these three rounds have been incredibly exciting! Let’s see how the winners of each genre bracket fared in the Final Four and who will face off in the Championship!

I expected Michael Jackson to run away with this against the Cinderella 10 seed Stevie Wonder. But true to his form in this tournament Stevie fought until the end. But it wasn’t enough this time as MJ heads into the Final with a 54-46 victory. That’s a 3 vote win for the King of Pop.

This was so hard for me to vote for. I believe both of these acts are integral to the paths taken by their respective genres. They are founding fathers of Country and Rock. In the end, yall had just as hard of a time as I did. The Beatles found a way to continue their winning ways, knocking off Johnny Cash by a score of 54-46. Both Semi-Finals ended with a 3 vote victory for the 1 seeds!

The Beatles and Michael Jackson came into the tournament as favorites and held strong throughout their regions.They both had tough match-ups in their Final Four games and barely pulled out the victory.

I’ll link the polls to each match-up  so just click on the match-up to go to each poll. Voting for the Championship will open immediately and will close Monday, April 4 at 4pm.

After the Final Four, our bracket now looks like this: 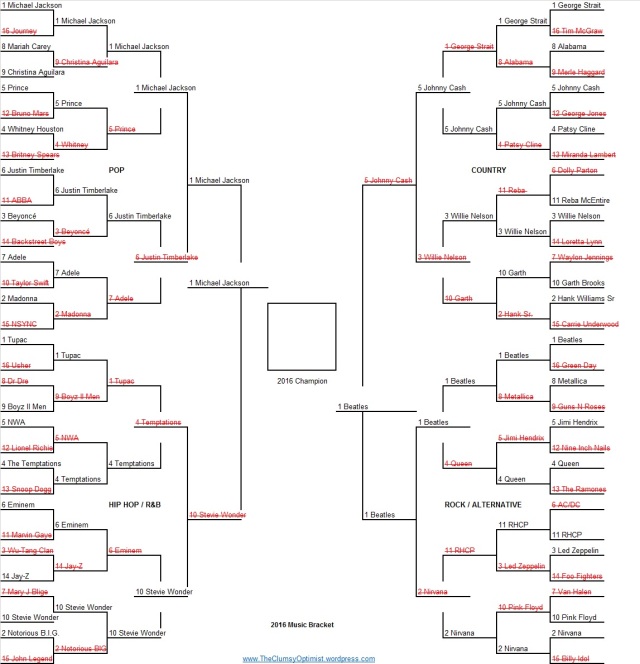 1 Michael Jackson vs 1 The Beatles

Polls are open. Let’s get to voting and see who wins the Championship Match-up! Voting will close Monday April 4 at 4pm. Again, to vote just click on the match-up and it will open the poll.

One thought on “March Music Madness – Championship Round”