Well here we are, the first weekend is over and we’re at the Sweet 16! There were some big time upsets in the round of 32. Let’s get right to it. Remember all “scores” are in percentage.

Michael did his thing in this round and moved on, dispatching X-Tina 88-12.

The 4/5 match-ups in this round are always the hardest to choose. Prince took out Whitney 63-37.

In the first real upset in this region, JT demolished H-Town’s own Beyoncé 78-22. I was a little surprised how lopsided this one was.

In maybe the shocker of the tournament so far, 7 seed Adele beat the Queen of Pop 65-35. I honestly did not see this one coming.

4 The Temptations vs 5 NWA

This 4/5 match-up was apparently not all that hard for yall to choose as The Temptations sent NWA to the house 83-17.

In the upset of this region, the 10 seed Stevie Wonder took out 2 seed Biggie Smalls 80-20.

George Strait gets the 2nd 100-0 victory of the tournament and moves on to the Sweet 16.

The Beatles march on after an easy win over Metallica 88-12.

This was the hardest decision for me in this round. I love them both so much! Queen moves on to the Sweet 16, besting Jimi Hendrix by a final score of 78-22.

In the win I least saw coming, the 11 seed Red Hot Chili Peppers knocked off the 3 seed Led Zeppelin 60-40.

Nirvana had an easy time with Pink Floyd, winning 70-30.

Some of these ended in ways I never saw coming. This is so fun! So the Sweet 16 is set and I have no idea how I’m going to pick in almost every match-up. This tournament has gotten to the point of almost impossible choices. Again, I’ll link the polls to each match-up  so just click on the match-up to go to each poll. Voting for the Sweet 16 will open immediately and will close Saturday, March 26 at 5pm.

After the round of 32, only one 2 seed still stands and the bracket now looks like this: 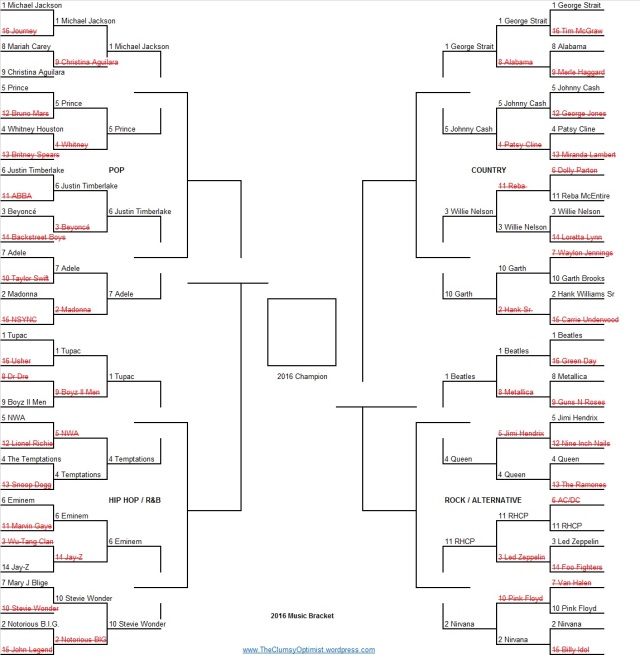 1 Tupac vs 4 The Temptations

That’s it. I have no idea how this round is going to go. Let’s get to voting and see who gets into the Elite 8. Voting will close Saturday March 26 at 5pm. Again, to vote just click on each match-up and it will open the poll.