I’m still trying to figure out exactly what I want this space to be. It’s going to be a little bit of personal anecdotes and some sharing pieces. I’ve been bad about remembering to write here often enough and with the new year starting this weekend my hope is to write at least two pieces every month. Procrastination has always been a huge issue for me – I wrote my senior thesis in college the night before it was due. Maybe TCO will be a way for me to work on that.

Every time we are coming back from a trip or come up on an anniversary, my wife asks me to name my favorite parts of the event/year/trip. I can always count on a quick smile and a “What were your favorite parts of _____?” With the new year upon us I thought it would be fun to look back at the year. With that, I give you a few of my entertainment favorites.

We love movies, but don’t get to the theaters as much as I would like. Maybe that’s a goal for next year. I can only remember seeing 4 movies this year in theaters and I loved every one of them. Mad Max: Fury Road had everything I loved about the first movies ramped up to 11. Favorite movie of the year. I’ve been lobbying the wife to watch it with me for months. I can feel I’ve almost broken her – a 2nd viewing is coming soon. Hunger Games: Mockingjay Part 2 was a great ending to a franchise. I enjoyed that it picked up basically a few minutes after the first part ended and the sewer scene still stands out as some of the best cinema of the year for me.

Jurassic World was essentially a love letter to  Jurassic Park, but I love that movie so I really enjoyed this one. Chris Pratt is great in everything he does and beyond the silliness of running from a T-Rex in high heels thing, the movie was a lot of fun. The other movie we saw in theaters was Trainwreck. I adore Amy Schumer so this was right up my alley. It was as irreverent as you could hope for and still endearing in the end. And let me say, LeBron James was not terrible!  The hope is to get to the movies much more coming up in the new year.

We didn’t get an Xbox 360 until 2009 so I’ve played catch-up as far as gaming goes. It saves me a ton of money because I rarely buy new games. With that said, I’ve spent over 50 hours on each of the following games this year. At the beginning of the year I finished the Bioshock series with Infinite. The story was slow at the beginning, but I am really glad I stuck with it. I won’t ruin the ending for anyone who hasn’t played, but it was one of those endings that made me want to replay the game immediately with the new knowledge to see how it changed my decisions. After that I played Assassin’s Creed: Black Flag. The ship battles were amazing in this game and the gameplay and story were far better than ACIII. It’s like they took all the fun parts of the last game and smashed them into a great story line.

The (old) game of the year for me was Fallout 3. I’m new to the Fallout universe and I know it is a beloved series and let me tell you, I can see why. I played over 100 hours of that game and still could run through it again. The story is just engrossing and the Capital Wasteland was just familiar enough to keep me looking for places I knew.  Moira Brown was someone that I wanted to be friends with in real life and I loved how the game let you decide how to handle each situation. It may be my favorite game of all time. It’s in the top 5 for sure.

For the past week or so, I’ve been playing Diablo 3. I’m not real sure if this will turn into a favorite, but I’ve had a good time so far.

There is something about travelling that let’s you know if you are meant to be with someone. This year, my wife has spent approximately 60 or 70 hours in a car with me. How she hasn’t murdered me while I slept in the back seat, I may never know! June saw us driving to and from West Virginia from Texas with my mother. The two of them get along well so it’s not as sitcomy bad as it could have been. We refer to this trip as the Vacation from Hell. And it was. In the span of two weeks, my mother fell at the Rock and Roll Hall of Fame and broke her wrist and eye socket, my grandmother ended up in the hospital, and my cousin hit a deer and crashed into the side of a mountain. In between all the trips to the hospital it was a typically beautiful trip to one of the finest states in the Union. We spent the week with family I may only see once every 4 or 5 years and shared lots of laughs. I was also finally able to show my wife the natural beauty that is West Virginia.

The Summer saw a 4th of July trip with the in-laws to New Braunfels. I had never been and my Brother in Law’s band was playing two shows at a cafe near the river. We stayed in a supposedly haunted hotel, but unfortunately got no proof. There was a brisk wind, so the 90 degree Texas days didn’t feel so stifling. We woke up early Saturday and floated the river and saw a great fireworks show that night. All in all – a trip without a trip to an ER was considered a success!

We never got around to taking a Honeymoon after we got married. It was just something that was always put off for new furniture or lay offs at jobs or last minute trips or emergency room visits. Well six and a half years late, we finally got around to it last weekend. We talked about all kinds of places and finally settled on New Orleans. We had both been separately, but thought it would be fun to go together. We were correct. I had some of the best Etouffee in my life, spent more than a few hours in a dueling piano bar, saw the Rockets play, and took a steamboat tour of the Mississippi River. I did feel a little like the family from A Christmas Story trying to find a place to eat that was open on Christmas day, but it was everything I could have hoped for. 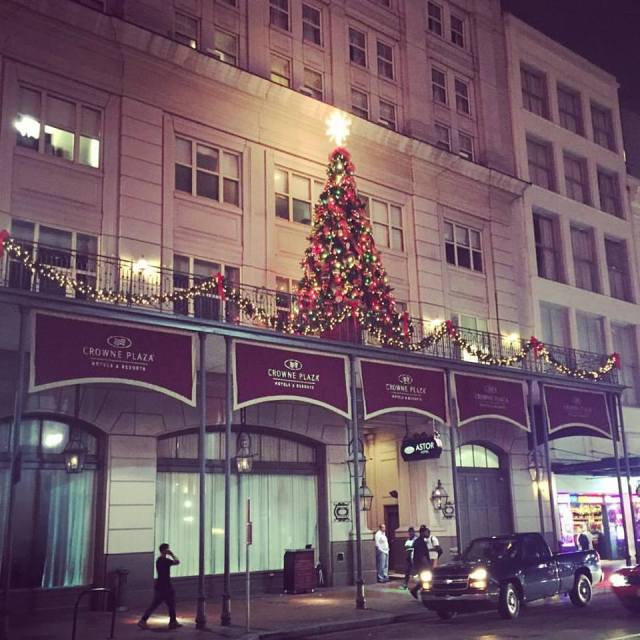 There is too much to look back on from 2015. It was definitely a year of ups and downs. There were a ton of things that happened in the world this year that tested my resolve of optimism. I’ve chosen to focus this look back on the ways that I tried to cope with the horrors of the world. If it’s ducking into a movie theater for 2 hours with some friends, getting lost in a post-apocalyptic video game Washington D.C., or driving to see loved ones, happiness and love will always win out over the tough times.

What were your favorite parts of 2015?